Featured in the Fall River News!

That’s the second time this week!

First about our Family Fun Fest, and now about our headlining act! 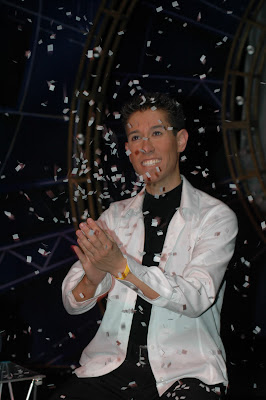 Unlike Harry Potter, Brad Ross doesn’t have a lighting-shaped scar on his forehead and he wasn’t born with the natural ability to conjure up magic, but he knew for certain at a young age that he wanted to become an illusionist.

A magician who performed at his fifth birthday party and made it seem as though the youngster had conjured up a rabbit sparked Ross’ imagination. He started taking magic classes after school and by age 13, he was performing for pay at birthday parties. “The art of magic allows you to take a break from reality and let your imagination take over,” said Ross.

He eventually joined up with Disney Live! Presents Mickey’s Magic Show and the 27-year-old spent six years touring 25 countries and five continents with the Disney show. Along the way, he garnered a Merlin Award in recognition of his work entertaining children and families and he’s been featured on hundreds of television shows including the Rosie O’Donnell show.

Now the young illusionist is taking the next step in his career with his own show, with assistants in tow. A native of New Jersey, Ross said his early inspiration was fellow New Jersey native David Copperfield, but these days, he said he’s also drawing inspiration from “the classics” such as Houdini.

The headliner at Providence’s Bright Night New Year’s Eve festivities, Ross will be performing three shows (6 p.m., 8 p.m. and 10 p.m.) of his signature act, “Illusionary Magic.” “I’ve worked in some new illusions that I’ll be premiering at Bright Night,” said Ross. “It’s a very high energy show. I pride myself on incorporating the audience — whether it’s 100 people or a few thousand like Bright Night — into the show. My goal is to make the audience feel like they’re a part of the show.”

Wristbands to Providence’s Bright Night guarantee admission into one of the shows, which attendees will have to select when they purchase a wristband. Wristbands cost $20 adults; $15 for seniors and kids and are available through www.brightnightprovidence.org or on New Year’s Eve at select Bright Night venues including the Bank of America Skating Center, the Convention Center, the RISD Museum and the Providence Children’s Museum.

Read more: http://www.heraldnews.com/newsnow/x1569728651/Illusionist-Ross-brings-magic-to-Bright-Night#ixzz1hy3EosKm
This entry was posted in article, Uncategorized and tagged articles. Bookmark the permalink.