BRIGHT NIGHT WILL THRILL AND CHILL
The Nerveless Nocks, a world renowned daredevil troupe, will headline the sixth year of Bright Night Providence 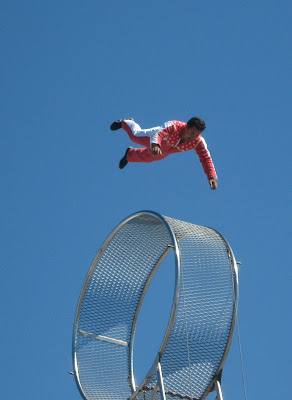 This year Bright Night Providence, the artist-run New Year’s Eve Festival now in its sixth year, will really start the new year with a thrill. That’s because The Nerveless Nocks, a family of daredevil circus performers, will be the featured performers in what is known as Rhode Island’s Largest New Year’s Eve Celebration.

The Nocks have a storied past: they are a ninth generation family of circus performers, starting back as early as 1840 in Switzerland. Today’s troupe is run by Michelangelo Nock, whose father arrived from Switzerland in 1954 to star in the Greatest Show on Earth. The family has performed throughout the world for kings and queens, at gigantic festivals (including a number of Superbowl and television events) and as the featured act on most of the great circuses of the world. It was Queen Elizabeth who dubbed them the “Nerveless” Nocks. 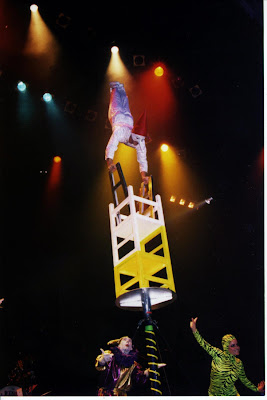 The shows for Bright Night will feature Michelangelo Nock, who has been dubbed the world’s greatest circus stuntman. Some of the acts featured in the show will be the Wheel of Destiny, in which the Nocks perform leaps, somersaults, handstands on a moving aerial pendulum; and the Tower of Chairs, where Michelangelo will climb a 20 foot tall tower made of chairs and do breath-taking handstands while completely unsupported from the ceiling.

“This is going to be a fantastic show,” says Adam Gertsacov, festival director of Bright Night. “The Nocks are absolute circus royalty. They’ve performed for kings and queens, on television and for the Superbowl. They are one of the premier acts in the business. And their courage and skill is breath-taking. I think this will be one of the best shows we’ve ever produced!”

“We’re really excited to be performing back in Rhode Island,” said Michelangelo Nock. “We grew up here. Our family used to do the sway pole act at Rocky Point during the summer for many years. We all have such fond memories of the area. And the Bright Night event- it’s incredible, that the artists and performers have made this all possible. We love it! We’re pleased to be a part of it.”

The Nerveless Nocks Daredevil Thrill Show will perform three shows in Providence as part of Bright Night. Their shows will be performed at 6, 8, and 10 pm at the RI Convention Center. Your Bright Night ticket (a Tyvek wristband) will guarantee you admission to one of those three performances, plus more than 50 other performances at 17 other venues throughout the day (on a space available basis).

Some of the other artists on the Bright Night bill include local legends Big Nazo Puppets, Celtic group Pendragon, bebop great Greg Abate, Grammy winner storyteller/singer Bill Harley, a blues swing/dance party featuring the Black and White Blues Band and the Superchief Trio, dance group Carolyn Dutra Dancers, a special Bright Night Poetry Slam, and a host of other artists and events. A full schedule will be available in early December on the Bright Night website, https://www.brightnight.org.

Tickets and complete schedules to Bright Night will be available in early December online at www.ArtTixRI.com, and available in person at all BankRI locations. all OOP! stores, and at the EastSide Marketplace starting December 6.

For more information about tickets call 401-621-6123 or visit https://www.brightnight.org

Tickets are $10 each if purchased in advance, $15 on the day of event. Family fourpacks for $50 will also be available. There are a limited amount of tickets, so purchase early to avoid getting closed out.

To find out more about Bright Night Providence, visit http://www.www.brightnight.org

To find out more about The Nerveless Nocks, visit http://www.nervelessnocks.com
###

This entry was posted in Uncategorized. Bookmark the permalink.