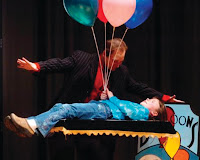 December 9, 2009, Providence, RI
This year, New Year’s Eve in Providence promises to be a magical evening. That’s because the headlining act for this year’s artist-run celebration Bright Night Providence will be master illusionist David Garrity in a show called IllusionQuest.

IllusionQuest is an exciting, full-stage, magic and illusion spectacular. Illusionist Garrity and his team magically appear, vanish, pass through solid objects and even float people from the audience.

Highlights from the performance include a comical illusion where David’s assistant ends up all twisted up; David also teaches a volunteer from the audience how to cut his assistant in half; and the finale features a breathtaking escape where David is chained to a table with 32 steel spikes suspended above him and he must escape before the spikes fall. 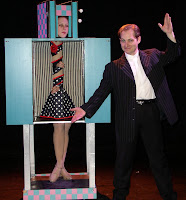 “We’re really excited to be presenting IllusionQuest this year,” says Adam Gertsacov, Festival Director of Bright Night Providence. “David is one of the top performers in his field, and he’s been wowing people in a variety of places, from Six Flags to Sweden, and lots of places in between. We’re happy to bring him to Providence. It’s the kind of family friendly show that’s got something for everybody. I really think he’s going to make more than a few people’s jaws drop in amazement.”

IllusionQuest will perform three shows in Providence as part of Bright Night. The shows will be performed at 6, 8, and 10 pm at the RI Convention Center. Your Bright Night ticket (a Tyvek wristband) will guarantee you admission to one of those three performances, plus more than 50 other performances at 12 other venues throughout the day and evening (on a space available basis).

Tickets to Bright Night are available online at www.ArtTixRI.com, and in person at all BankRI locations, all OOP! stores, and at the EastSide Marketplace.

For more information about tickets call 401-621-6123 or visit https://www.brightnight.org

Tickets are $10 each if purchased on or before December 24. Starting December 25, tickets are $15 each or a family fourpack for $50. There are a limited amount of tickets, so purchase early to insure getting your choice of times for the IllusionQuest show.

To find out more about Bright Night Providence, visit https://www.brightnight.org.

To find out more about David Garrity’s IllusionQuest, visit http://www.magicalartist.com.

###
This entry was posted in Uncategorized. Bookmark the permalink.